On June 17, 2014, the Ministry of Commerce (the "MOFCOM"), the major regulator of foreign investment in China, issued the Notice on Improving Foreign Investment Review Administration (商务部关于改进外资审核管理工作的通知) (the "MOFCOM Notice") to make it clear that registered capital contribution requirements for foreign invested enterprises ("FIEs")1 have been relaxed.

Early in 2013, the State Council launched a reform on companies' business registration (See China Law Update Blog: China Business Registration Reform, dated on March 6, 2014). Under theNotice on Reform Plans of Registration Policies of Registered Capital, GuoFa [2014] No. 7 (国务院关于印发注册资本登记制度改革方案的通知) (the "Notice") issued by the State Council on February 7, 2014, capital contribution requirements to a company are relaxed and the minimum registered capital requirement is removed. Furthermore, theDecision of the State Council on Repealing and Amending Some Administrative Regulations (2014) (国务院关于废止和修改部分行政法规的决定（2014)) (the "Decision") effective on March 1, 2014 amended the three foreign investment implementation regulations2. Even so, after March 1, 2014, both the Notice and the Decision did not, at least from our then communications with the administration of industry and commerce in some major cities, impact the business registration process of foreign invested enterprise.

However, starting from June 17, 2014, MOFCOM and its local counterparts would improve their foreign investment review in the following six respects:

MOFCOM would not review the paid-in status of registered capital of an FIE except for the twenty-seven types of companies listed in the Notice by the State Council (see below chart). 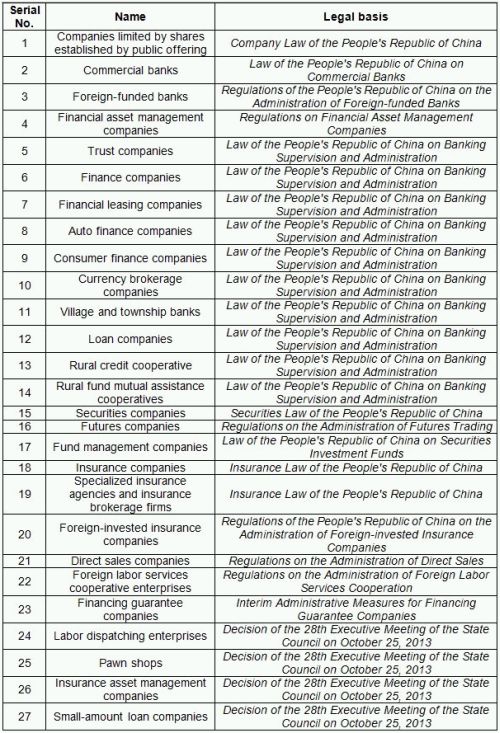 4. Retroactivity of the MOFCOM Notice

In respect of an application for establishing an FIE submitted before the date of March 1, 2014 (the date when the Decision by the State Council took effect), investors shall fulfill their obligation to make the capital contribution complying with the contract. However, investors can also apply for an amendment of the capital contribution terms in their contracts and follow the new provisions of the MOFCOM Notice.

5. The Proportion of Registered Capital to Total Amount of Investment Still Valid

6. Compliance of Local Counterparts with the Decision by the State Council

Under the MOFCOM Notice, MOFCOM requires its local counterparts to follow the Decision by the State Council, which has abolished requirements for the amount, manner and timeline of capital contribution in an FIE5.

Though with exceptions and limitations, the MOFCOM Notice frees FIEs from burdensome capital registration requirements and subject FIEs to the same review standards as Chinese enterprises in respect of business registration process, which is deemed to be one step forward to free and open market6.

3 Article four of Certain Regulations on the Subscription of Capital by the Parties to Sino-Foreign Joint Equity Enterprises (effective on January 1,1988) provided that if the joint venture contract stipulates that capital is to be paid up in instalments, the first payment by the respective joint venture parties shall be not less than 15% of the respective capital contribution of each party and shall be paid within three months of the day of issue the Business License. Such requirements have been abolished, see Footnote 5.

5 The Decision repeals both Certain Regulations on the Subscription of Capital by the Parties to Sino-Foreign Joint Equity Enterprises, effective on January 1,1988and Supplementary Provisions Regarding Investment Contributions by Parties to a Sino-Foreign Equity Joint Venture, effective on September 2, 1997.

6 Through our recent consultation with local MOFCOM and administration of industry and commerce in Beijing, Shanghai and Shenzhen, the MOFCOM Notice has been put into practice.