Foreign investors are permitted to invest in China's stock markets1, provided that an investor is a Qualified Foreign Institutional Investor ("QFII"). Previously, applying for QFII status took as long as one to two years, and in some cases the entire process took even longer. However, recent reforms and policy adjustments will reduce this processing time to approximately six (6) months or less if the application is prepared correctly. Therefore, this policy change provides foreign financial institutions with a window of opportunity to qualify as a QFII and to deploy capital to invest in China's burgeoning stock market when the timing is right.

This alert summaries the QFII statutory framework, and gives a comparison between the old timetable and the now revised timetable.

The QFII Scheme in the PRC

A QFII refers to any overseas (i.e. non-Chinese) fund manger, insurance company, commercial bank, securities firm, or asset management firm (generally referred to as "financial institutions") approved by the China Security Regulatory Commission ("CSRC") to invest in the Chinese stock market within an investment quota set forth by the State Administration on Foreign Exchange ("SAFE").

The Application for QFIIs: A Comparison Between the Old and the Recently Enacted Reforms

Historically, the timetable for approval of a QFII application submitted through a PRC domestic bank was one to two years. However, the recent policy change has reduced this approval time from nearly two years to six (6) months or possibly shorter for banks and firms capable of managing such an accelerated timetable. In December of 2011, 14 applicants obtained QFII approvals from the CSRC, while another 7 were approved in January 2012. However, we expect this window of opportunity to be short, as we have seen a surge in QFII applications in response to these new developments. We therefore suggest that an application be filed sooner rather than later with the CRSC before the waiting time becomes too long again.

1. In order to qualify as a QFII, an applicant must satisfy the following requirements:

The following table details certain requirements such as minimum assets under management and minimum years of business operations for different types of institutions.6 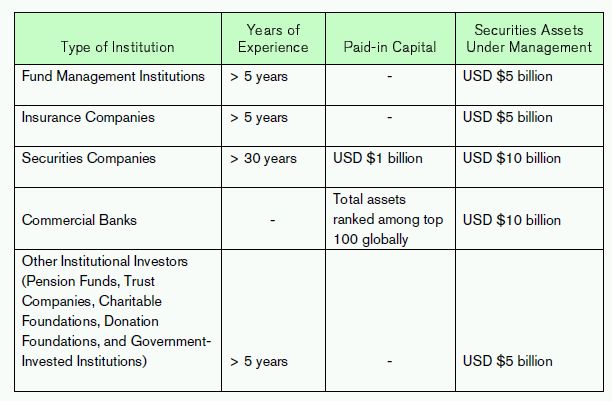 2. The following are some factors important to the CSRC when evaluating an application:

3. In order to encourage middle and long-term investments, promote the steady growth of capital markets, and consider the effect of reciprocity between the PRC and other countries, preference is given to applicants in any of the following three circumstances:

There has not been a better time for foreign fund managers and financial institutions to become a QFII to invest in China's stock markets or in Chinese securities. However, foreign investors should apply for QFII status as soon as possible to avoid queues that might develop from an increase in applications. Given the complexities and the time-sensitive nature of the application process, we recommend that any foreign investors interested in applying for QFII status retain experienced legal counsel.

2 For example, pursuant to figures from the People's Bank of China, in October 2011 China recorded its first year-onyear quarterly decrease in its foreign exchange holdings. The decrease is due to China's own "going global" initiative encouraging overseas investment and a recent entrenchment in foreign money inflows.

3 'A' shares refer to the RMB-denominated ordinary shares issued by mainland China-incorporated shareholding companies and traded on the Shanghai and Shenzhen Stock Exchange.

4 Measures on the Administration of Domestic Securities Investments by Qualified Foreign Institutional Investors, promulgated by CSRC, PBoC, and SAFE on 24th August 2006.

5 Notice on Issues concerning the Implementation of the Measures on the Administration of Domestic Securities Investments by Qualified Foreign Institutional Investors, issued by CSRC on 24 August 2006.

6 These figures are general and subject to change based on the type of firm applying for the QFII, the location of the firm, the types of investments the firm proposes to make in China, the duration of the investment, the firm's management capabilities, and the reputation of the firm, among other factors.