China: China’s Security Review System For Foreign Investment: Where Do We Stand?

Almost three years have passed since China formally established its security review system with regard to mergers and acquisitions of domestic enterprises by foreign investors ("Security Review System"). The regime has had a relatively low profile when compared with the acceleration in China's Anti-Monopoly Law ("AML")-related enforcement activity and procedural developments over the same period.

The very broad scope and criteria for review, and the lack of significant new developments since the Ministry of Commerce ("MOFCOM") finalized its procedural rules for the regime,1 mean that there remains the risk that, in seeking to ensure compliance with these rules, local bureaus could broadly interpret what may be a "sensitive" sector or investment and thereby cause further delays in relation to foreign investment deals (by referring such transactions to MOFCOM and suspending their own reviews). Three years on, the lack of transparency and the uncertainties created by the regime are still issues to be addressed by Chinese authorities, and foreign parties looking to invest in China will have to continue carefully navigating this process for the foreseeable future.

This article summarizes the key aspects of the regime, including its background, scope and relevant procedures and rules to date.

National security screening requirements were codified in Chinese national legislation for the first time in August 2007 through the inclusion of Article 31 in the AML, which stipulates that M&A of domestic enterprises by foreign investors where national security is affected should undergo national security review "according to relevant provisions" ("Security Review"). However, no further provisions or regulations were enacted to provide details for the process as referenced in Article 31 during the period 2007-2010, until Circular 6 and the MOFCOM Rules were issued.

According to Circular 6, a transaction falls within the scope of Security Review if the following two criteria are satisfied. In practice, the broad and non-exhaustive wording of the criteria (especially in terms of relevant sectors) will often raise doubts as to whether a particular transaction is caught by the Security Review System, in which case foreign investors may consider consulting with MOFCOM to seek clarity around this issue.

A transaction may be the subject of a Security Review if it is a "merger/acquisition of a domestic enterprise by foreign investor(s)" for the purposes of the Security Review System, which includes the following types:

The second criterion determining whether a transaction will be reviewed under the regime is whether it involves a merger/acquisition of a domestic enterprise active in certain sectors in China, where the transaction satisfies either of the descriptions below:

On a literal reading of Circular 6, it would appear that the Security Review System sets a lower threshold for foreign investment transactions relating to Sector A enterprises (those connected with military and national defense interests), requiring only an "acquisition," as opposed to "acquiring actual control." However, the description of Sector B enterprises (those that have a bearing on national security) is extremely broad, and there remain uncertainties and contradictory views held by various government departments as to what this means in practice.

A foreign investor, together with its parent holding company and/or its holding subsidiary, holds 50% or more of the total shares in a relevant domestic enterprise following the relevant transaction;

What are Sector B enterprises?

The table on the following page lists relevant documents issued by various authorities that provide some guidance on the Circular 6 criteria by specifying the types of enterprises that have a bearing on national security.

Even drawing on the guidance provided in these documents, the Circular 6 criteria relating to Sector B enterprises remains very broad. Article 4 of the MOFCOM Rules provides that foreign investors can apply to MOFCOM for consultation on the relevant "procedural" issues of the Security Review System. However, Article 4 also makes it clear that such consultation has no binding and legal effect. Foreign investors may obtain a legally binding answer from MOFCOM only by making a formal application to MOFCOM, which will then entail additional paper work and time. Parties may choose to also consult MOFCOM on "substantial" issues (such as whether a transaction shall undergo Security Review).

Under Circular 6, a Security Review will involve assessing whether a foreign investment transaction will impact any of the following:

These are obviously also very broad review criteria, and foreign investors are no doubt concerned about the breadth of discretion it affords Chinese agencies to identify security concerns in respect of the China-focused transactions.

The flow chart below summarizes the key aspects of the Security Review process under Circular 6 and the MOFCOM Rules. 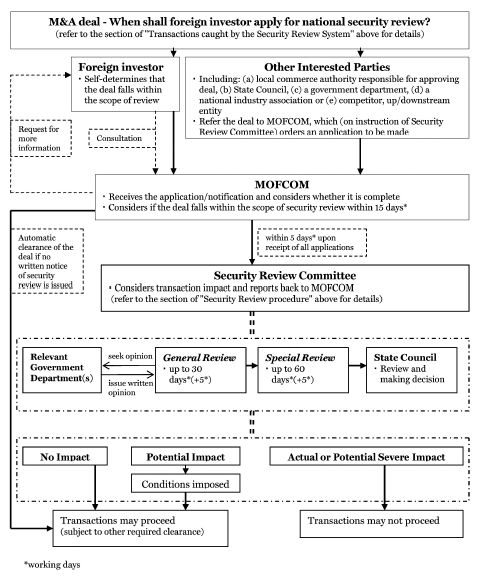 The Security Review Committee is charged with analyzing the impact of notified transactions on national security and making decisions.

Foreign investors must apply to MOFCOM for Security Review of their M&A transactions in the following three circumstances:

In considering whether a transaction falls within the scope of Security Review, MOFCOM will look at the substance and actual impact of the arrangements. The MOFCOM Rules clearly state that foreign investors shall not circumvent Security Review by means of nominee holding structures, trust arrangements, multilayer investment and reinvestment structures, leasing or lending arrangements, contractual control mechanisms, overseas transactions or any other means. It should be noted also that guidelines relating to the security review process issued by the Department of Foreign Investment Administration of MOFCOM require that parties submit a written guarantee that they have not sought to avoid the Security Review process, such as by utilizing an arrangement of the type mentioned.

REFERRALS BY GOVERNMENT DEPARTMENTS AND THIRD PARTIES TO MOFCOM

New wording was added to pre-existing provisions empowering government departments, industry associations and industry participants to alert the Chinese authorities to deals that they consider should be subject to security review. This wording states that MOFCOM may "require relevant explanations" from entities that make such referrals. While this may simply reflect the ability of MOFCOM to liaise withthe relevant entities to obtain necessary details, it may also reflect concern about the potential for the referral process to be misused by (in particular) competitors of the parties proposing to enter into a relevant M&A deal—and to empower MOFCOM to make inquiries into whether a referral is made simply in an attempt to cause difficulties and delay for transactions.

MOFCOM shall, within 15 working days from the date of accepting the application, form a view on whether it considers the notified transaction should be subject to Security Review and, if yes, inform the applicant in writing. MOFCOM then shall refer the application to the Security Review Committee within 5 working days. An applicant shall not implement its transaction during this time but can proceed if it does not receive any notice from MOFCOM after the 15-day period expires.

If a transaction is referred to it for review, the Security Review Committee will undertake a preliminary review ("General Review") of the transaction for a period of up to 30 working days, during which time it will consult with interested government departments.

If it is determined during this General Review that the transaction does not raise national security concerns, the Security Review Committee will inform MOFCOM of this decision in writing (and MOFCOM then has 5 further working days to report the decision to the transaction parties).

If, however, any of the government departments that are consulted consider that the transaction does raise national security concerns, a further review will take place ("Special Review").

According to Circular 6, Special Review may take up to 60 working days, at the end of which the Security Review Committee will deliver to MOFCOM a decision in writing (which MOFCOM will inform the applicant within 5 working days). However, if there is significant disagreement among members of the Security Review Committee as to whether the transaction does give rise to Security Review issues, the transaction will be referred to the State Council for further consideration. No time limit for State Council consideration is provided under Circular 6.

The Security Review Committee will, after substantial review of a notified transaction, provide a decision in writing to MOFCOM, which will then notify the applicant in writing within 5 working days.

If the Security Review Committee decides that the notified transaction has no impact on national security, the transaction parties may proceed (subject to other required foreign investment approval and registration procedures).

China's Security Review System, which operates separately from merger review under the AML (although there are references to security review in the AML) and other foreign investment approval processes, remains an additional area in which foreign parties must tread carefully when considering investing in China. The interaction of these different review systems interact, particularly through the Security Review referral process, will likely result in gradual developments of law and procedure as China continues its efforts to keep these regimes consistent and unified (such as the formal introduction in the MOFCOM Rules of a confidentiality obligation similar to that in the AML system, requiring MOFCOM and other entities involved in the Security Review process to keep state secrets, trade secrets, and other related secrets confidential).

MOFCOM Rules failed to clarify a number of important issues relating to the Security Review process, including how parties can in practice self-assess deals for any potential bearing on China's national security when the Chinese authorities have so far only published a very broadly worded and non-exhaustive list of sectors that may be considered "sensitive" in this respect (and they do not publish details on transactions reviewed by the Security Review Committee). Until further guidance is issued, given the inherent uncertainties that still remain in the Security Review System, it is essential for foreign investors to consider at an early stage whether there is a need to engage with local commerce authorities and to consult with MOFCOM to obtain as much clarity and certainty as possible so as to mitigate risk in their transactions.

Apart from dealing with the difficulties of self-assessment and securing other required approvals in a timely manner, foreign investors need to keep mindful of the changing scope of Security Review along with China's continuing economic development and industry focus. These investors also need to be aware of, and sensitive to, the relevant government policies and big picture issues concerning the industries in which they are considering investing. u

1 China's new state security committee, announced at the Third Plenum of the 18th Communist Party of China Central Committee in November 2013, will not likely be directly relevant to the Security Review System, given that experts in China have commented that it is modelled on the US National Security Council as a high-level organ under the direct leadership of the President to handle major and strategic matters in relation to national security and foreign policy.

4 An example of such a list is available at http://zhuzhou.hninvest.gov.cn/tzzn/381334.htm . However, the industry codes used in this list (security review industry table) are based on the old 2002 version of the Classification of National Economic Industries, suggesting that this list may have since been updated by MOFCOM.