In August 2013, the Ministry of Commerce of China (MOFCOM) issued two new conditional approvals, bringing to 20 the total number of transactions cleared with conditions since China's Anti-Monopoly Law was enacted five years ago. The regulator sought "hold separate" obligations from the parties in relation to MediaTek's acquisition of MStar Semiconductor Inc (MStar), while imposing a structural divestiture remedy in Baxter/Gambro.

Following a precedent set in Glencore/Xstrata, MOFCOM also published, annexed to the two decisions, the full text of the remedial commitments imposed on the parties as a pre-condition to clearance. This demonstrates the regulator's on-going commitment to greater transparency and is to be welcomed on that account. Further, MOFCOM's analysis in the cases shows a growing confidence and sophistication although the decisions lack the level of detail one might be accustomed to in other jurisdictions.

In this update, we explore the issues raised in these two cases and the implications for MOFCOM's future practice.

First notified on 31 December 2012, MOFCOM accepted the parties' filing as complete on 12 March 2013. The transaction was conditionally approved on 13 August 2013 after MOFCOM opened a so-called "Phase III" review – an agreed extension to Phase II. While the parties had submitted remedy proposals during Phase I after acknowledging possible competition concerns, it is somewhat normal for MOFCOM to require a rather extended review in any case leading to conditional approval.

MOFCOM focused its competition assessment on the relevant global and domestic China markets for continuous renal replacement therapy (CRRT) equipment and related consumables (collectively, the markets for CRRT equipment) and haemodialysis (HD) equipment, concluding that the transaction would likely eliminate or restrict competition in these markets and specifically, for MOFCOM's purposes, the China market for the relevant products.

The pie charts below show the parties' respective market shares in the relevant CRRT China markets as disclosed by MOFCOM in its published decision. Interestingly, MOFCOM also offers a detailed assessment of concentration levels pre- and post-transaction using the Herfindahl-Hirschmann Index (HHI)1. MOFCOM's findings in this respect are shown here in chart form. 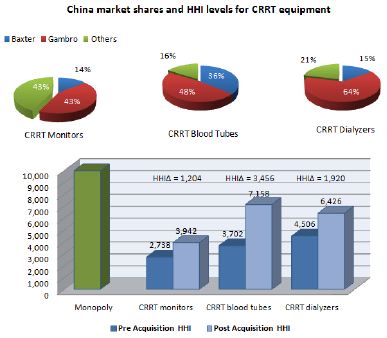 In relation to CRRT equipment, MOFCOM found that the transaction would significantly increase concentration levels in the relevant markets (the HHI "delta" or difference between the HHI levels pre- and post-acquisition serves as an indicator or proxy for the change in concentration levels brought about by the merger) and eliminate Baxter's closest competitor, resulting in high combined market shares held by the merged firm post acquisition and affording it what MOFCOM regarded as a "dominant position" in the China markets for CRRT equipment.

With respect to HD equipment, MOFCOM concluded that the transaction would likely result in "coordinated effects" in the relevant markets in China, with the two main competitors – the merged entity and a third party Nipro Medical Corporation – holding a combined 48% market share. Although the "increment" in the merged firm's market share was a modest 3% (according to MOFCOM Gambro's market share was 19%, while Baxter's was 3%), the key consideration would appear to have been the existence of an agreement between Baxter and Nipro Medical Corporation for the production of HD products. MOFCOM was concerned that this agreement created a risk that competitively sensitive information would be exchanged on such matters as production costs and quantities. The agreement would "facilitate the mutual coordination" of the two key players on the China HD market, MOFCOM felt. On this point, it might be noted that MOFCOM appears generally more open to deploying a coordinated effects theory of harm as compared with authorities elsewhere. That said, the existence of structural links between players in a market is generally recognised as an important consideration when assessing the likelihood of coordinated effects.

In light of its concerns, MOFCOM approved the transaction subject to the following conditions:

Other authorities, notably the EU Commission and the Australian Competition and Consumer Commission, accepted a similar remedy in relation to CRRT equipment. By contrast, the EU Commission noted in its press release announcing it had cleared the transaction that it "found that Baxter and Gambro are not particularly close competitors in HD and will continue to face, after the merger, significant competition from a range of dynamic market participants". Different regulators reaching different conclusions is of course an inevitable feature of global merger control as the competitive effects of a given deal might well vary from one geographical market to the next.

MediaTek/MStar was first filed with MOFCOM on 6 July 2012. Following a number of rounds of unsuccessful negotiations between the parties and MOFCOM over the scope of a possible remedies package, the filing was eventually withdrawn at the end of its first "Phase III" review in February of this year. The parties then resubmitted the filing in early March and it was eventually cleared during a second Phase III proceeding on 26 August 2013.

MOFCOM noted that both merging parties are mainly engaged in the design and manufacture of integrated circuit chips for multi-media display and wireless communications devices. After concluding that the transaction would not likely have any anti-competitive effects on the market for mobile phone baseband chips, MOFCOM focused its review on the market for LCD TV control chips. The published decision is somewhat equivocal as to whether the geographic scope of this market is global or national but MOFCOM's main concern was clearly the China market which, in any event, has its own special features. MOFCOM noted that designers of LCD TV control chips have to meet certain specific requirements in China in terms of pricing and other cultural and linguistic factors.

The pie chart below shows the parties' respective market shares in the relevant China market as set out in MOFCOM's decision. As in Baxter/Gambro, MOFCOM offered a detailed assessment of concentration levels in the market using the HHI system of indicators. MOFCOM's findings in this respect are again shown here in chart form. 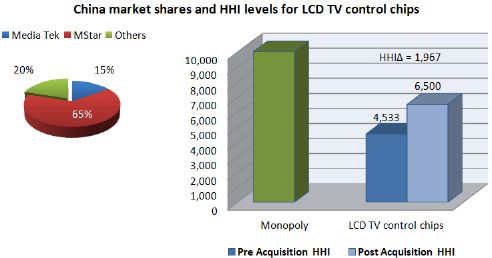 MOFCOM considered the relevant Chinese market for LCD TV control chips to be highly concentrated before the merger and noted that the transaction would "obviously" change the structure of the market once completed. In MOFCOM's view, the acquisition would eliminate MediaTek's closest competitor and remaining suppliers and the threat of new entry would not constitute an effective competitive restraint post merger. MOFCOM concluded that the merged entity would become the "dominant" player in China with a market share of 80%.

Interestingly, MOFCOM also referenced the dynamic nature of the relevant markets, and the fact that customers of the merged firm (Chinese TV manufacturers) may have some countervailing buyer power and could conceivably sponsor entry into the market for LCD TV control chips in the long term. However, the regulator concluded that notwithstanding these various factors, the transaction was still likely to result in anticompetitive effects in the short term and it therefore sought a remedy proposal.

In view of its concerns, MOFCOM imposed a rather striking set of behavioural remedies – an extensive "hold separate" structure of the kind previously seen in Western Digital/Hitachi. The restrictive conditions were imposed for an initial period of three years after which MediaTek might make a reasoned submission for their release:

Looking at these remedies, the obvious question might be why MOFCOM would choose such a structure over a divestiture which would clearly address the competition concerns identified and place less of a burden on MOFCOM in terms of monitoring the arrangements. On the other hand, a straightforward divestiture would not have afforded MOFCOM the leverage it has acquired over LCD TV control chip pricing in China in view of the pricing commitment described above. This is a feature of the remedies package in MediaTek/MStar which commentators will likely see as demonstrating a concern for industrial policy considerations.

1. The Herfindahl-Hirschmann Index measures concentration levels in a given market by summing the squares of the individual market shares of all the firms in the market.

Learn more about our PRC offices and Antitrust & Competition practice.