Cayman Islands: Cayman And The US Sign FATCA Agreement

George Town, Grand Cayman – Building on more than a decade of cooperation in tax matters, the Cayman Islands and the US today signed an agreement that paves the way for automatic exchange of tax information under US FATCA.

The two governments also signed a new tax information exchange agreement (TIEA), which replaces the original TIEA signed in 2001. The new TIEA stipulates the legal channels through which information will be automatically exchanged.

FATCA, or the Foreign Account Tax Compliance Act, is a US tax-reporting initiative, developed to assist the US Internal Revenue Service in preventing tax evasion by US persons living overseas. Cayman has signed a FATCA Model 1 intergovernmental agreement (IGA); this enables financial institutions in Cayman to directly report information to Cayman's Government regarding accounts and non-financial entities that substantially are owned by US citizens and residents. Government will then relay the information to the IRS.

The signing was held in London, immediately after Cayman officials participated in the UK's Joint Ministerial Council of Overseas Territories. Signing the documents were Cayman's Minister of Financial Services, Wayne Panton; and the US Embassy in London's Minister-Counselor for Economic Affairs, Julie Nutter.

'By working together to detect, deter, and discourage offshore tax abuses through increased transparency and enhanced reporting, we can help build a stronger, more stable, and accountable global financial system', Ms Nutter said. 'We look forward to collaborating with the Government of the Cayman Islands to further these objectives'.

Minister Panton acknowledged the support of Cayman's financial services industry in deciding that a Model 1 IGA was the best option for Government to pursue. The second option for a FATCA IGA, known as Model 2, requires financial institutions to report directly to the IRS.

'With a Model 1 IGA, Government's Tax Information Authority will implement the standardised data-reporting framework for FATCA', he explained. 'This should help to defray administrative costs for financial institutions'.

Minister Panton also noted that the FATCA Model 1 IGA is poised to become the global standard for multilateral automatic exchange.

'Signing these agreements clearly demonstrates that both Cayman and the US are committed to the stability and growth of global financial services, which contributes to stability in our country's economies and increased opportunities for our people', he said.

Gonzalo Jalles, CEO of industry group Cayman Finance, noted that FATCA requires financial institutions to register with the US Treasury and, in accordance with the IGA, agree to report certain information about their account holders. Treasury will open the registry portal this January.

'Industry is pleased that Government consulted them on which IGA to pursue, and that our recommendation for a Model 1 was accepted,' he said. 'We look forward to seeing the final IGA, as industry continues to prepare for the FATCA implementation process'.

As part of that process, Mr Jalles said that Cayman Finance, in collaboration with the Ministry of Financial Services, has organised a full day's seminar in January to cover the registration process in detail, along with other international taxation topics. Furthermore, Minister Panton said that Government is setting up a working group to handle the detailed legislative framework and implementation matters.

In addition to US FATCA, on 5 November Cayman signed a FATCA-type agreement with UK. This implements a reporting mechanism to automatically share financial information with the UK, on UK taxpayers who hold Cayman Islands accounts.

Note: The remarks that Minister Panton delivered at the signing are attached. 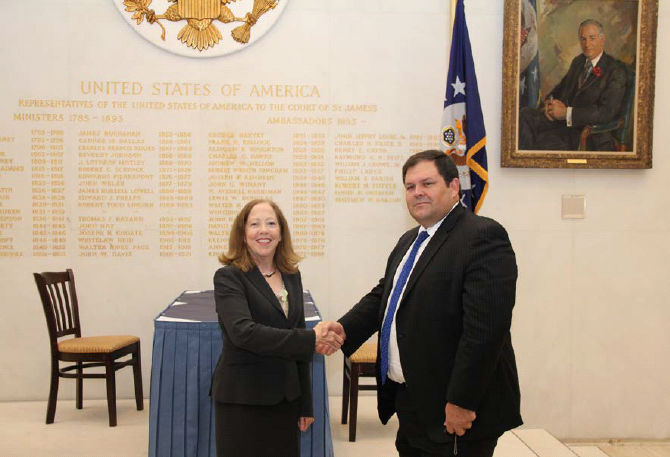 Caption: The Cayman Islands and the US signed a FATCA Model 1 intergovernmental agreement, and a new tax information exchange agreement, on 29 November in London. Signing on behalf of their governments are the US Embassy in London's Minister-Counselor for Economic Affairs, Julie Nutter (left), and Cayman's Minister of Financial Services, Wayne Panton. 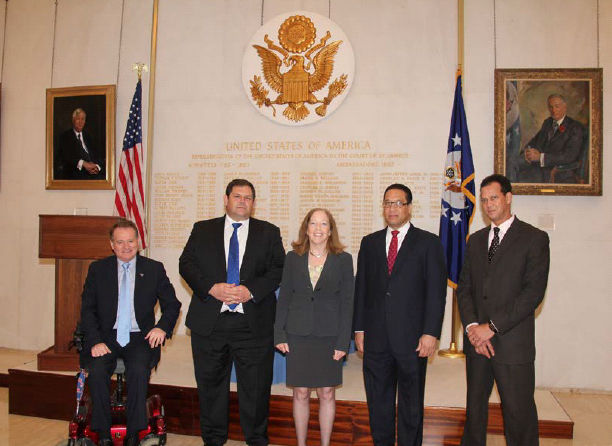 Caption: The Cayman Islands and the US signed a FATCA Model 1 intergovernmental agreement, and a new tax information exchange agreement, on 29 November in London.

In comparison with Ms Nutter's comments, mine will take a little longer because of the particular significance this signing has for the Cayman Islands, as an international financial centre.

On behalf of Government, I am pleased today to sign this FATCA Model 1 intergovernmental agreement, and a new tax information exchange agreement, with the US.

Discussions between the Cayman Islands and the US on FATCA have spanned nearly three years, and I congratulate both countries' negotiation teams for ensuring that these agreements fulfil not only the letter of FATCA, but also the spirit of global efforts on transparency and exchange of tax information - which is to vigorously fight tax evasion.

This event, then, is much more than a photo op over some documents. The substance of our IGA and TIEA is that they will help to improve the collection of public revenue, which provides US citizens with benefits such as:

While the benefits for the US economy are clear, some may ask, what are the benefits for Cayman's economy? Again, the answer is clear. Our participation in globally accepted transparency and tax information exchange initiatives speaks volumes of our financial services integrity, and that leads to the confidence and trust that investors continue to have in us.

Today, Cayman is the first Overseas Territory to sign a FATCA agreement with the US. But for those who may not know, the Cayman-US collaboration in the fight against financial crimes is not a recent phenomenon.

In fact, the TIEA we are signing today replaces the original agreement we signed back in 2001. Furthermore, it complements initiatives such as the Mutual Legal Assistance Treaty, which we signed more than two decades ago, in 1990. We are therefore well aware of the benefits such agreements have for both of our countries.

Beyond advantages to our individual economies, however, these agreements say that Cayman and the US are upholding their individual responsibilities to help protect public revenue, in both developed and developing countries. As each country agrees and signs up to standards that are globally accepted and practiced, there are fewer places for criminals to hide.

And this is happening, most significantly through the Global Forum on Transparency and Exchange of Information for Tax Purposes. In recent ratings on forum members' legal and regulatory frameworks, as well as their practices, the Cayman Islands and the US were deemed largely compliant - along with Canada, Germany, the UK, and 21 other jurisdictions.

So, without a doubt, today's signing of a FATCA Model 1 IGA and a new TIEA builds on our countries' history of collaboration against financial crimes including tax evasion, and speaks strongly of our continuing commitment to global transparency and exchange of information standards. Ms Nutter, again, it is my pleasure to sign these agreements on behalf of the Cayman Islands. Thank you.