by
Walkers
0 Liked this Article
To print this article, all you need is to be registered or login on Mondaq.com.

The role of the Cayman Islands in finance transactions has developed apace with the increased size and sophistication of the world's financial markets. From its beginnings as a centre for finance vehicle subsidiaries, to the growth of bond issues in the late 1970's, the late 1980's saw a huge increase in volume of repackaging transactions with hundreds of billions of dollars of repackaged debt being issued. At about the same time, many Cayman Islands vehicles diversified from the traditional bond issue to establish and issue notes under other types of programmes, which made the issuing of repackaged debt quicker, cheaper and less document intensive.

With these financing techniques came securitisation transactions, where the underlying asset was no longer the income and principal payments of an underlying bond but an income stream of receivables. A limitless variety of sources such as aircraft lease receivables, royalty contracts, and credit card receivables became available - the only limit now seems to be the imagination of arrangers and the appetite of investors.

The Cayman Islands are generally viewed as one of the world's leading financial centres and are a major provider of SPV related services generally and, more particularly, vehicles and legal, administration and other services for the purposes of structured finance transactions. The financial services industry in the Cayman Islands has developed over nearly four decades and the Cayman Islands have in place a framework of commercial legislation which is both modern and flexible and able to meet the requirements of innovative financing structures. As a jurisdiction, the Cayman Islands offer expertise, efficiency, stability and professionalism.

The essential element of these types of transactions is the conversion of various assets into marketable securities. Typically an SPV will purchase an asset or pool of assets from a corporate or other financial institution. The SPV funds the purchase of the asset or assets by the issue of securities.

Such an SPV will often be an 'orphan' company owned by a share trustee, which holds the shares of the SPV on trust for charitable purposes. This means that the assets of the SPV will not appear on the balance sheet of any party to the transaction.

The asset or pool of assets acquired by the SPV will generate a cash flow to pay interest on the securities. The arranger will also use part of the proceeds of the issue of the securities to pay all fees and expenses on behalf of the SPV and additionally the SPV will often receive a small fee in order for it and its directors to demonstrate some corporate benefit to the SPV and so make the transaction transparently for the benefit of the SPV, so as to avoid potential challenge. Ultimately, the redemption proceeds of the underlying assets (or occasionally the sale proceeds) are used by the SPV to redeem the securities upon maturity. 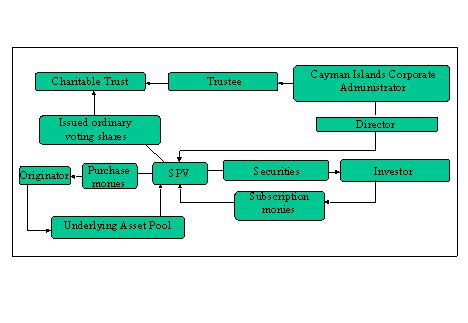 The laws of the Cayman Islands are essentially based upon the English common law system so that the central issues of corporate power, directors' fiduciary duties, corporate personality, limited liability and corporate benefit are in all substantive respects the same as the position under English common law.

At the same time, however, Cayman Islands commercial legislation benefits from being much less cumbersome in many of the areas that have caused considerable difficulty and uncertainty under the corresponding English statutes. For example, Cayman Islands Companies Law provides that shares are redeemable not only out of profit but also from the credit balance on the share premium account or from capital enabling an equity instrument to have much of the economic substance of debt. In addition, while under English law it is unlawful for a company to directly or indirectly provide finance for the acquisition by a third party of its own shares (so-called "financial assistance"), financial assistance in the Cayman Islands is not unlawful. The directors must simply ensure that the transaction is demonstrably for the material benefit of the company. A further point is that under the Cayman Islands Companies Law, contractual subordination is given statutory force. This means that both those structuring transactions and creditors can be confident that a priority of payments agreed by a Cayman Islands issuer is enforceable by creditors even if those creditors do not have the benefit of an associated security interest. This ensures that a waterfall will bind all creditors even where the company has granted only a negative pledge rather than a more rigid form of security interest. This obviously gives more flexibility in structuring transactions.

It is common knowledge that the Cayman Islands imposes no corporation taxes on any company carrying out either domestic business or offshore business. However, it should be borne in mind that, as well as the absence of direct tax, an SPV can obtain a written tax undertaking from the Cayman Islands' Government that no taxation introduced for a period of at least 20 years from the date of the undertaking will apply to the SPV or the holders of its securities. This period can be extended if necessary.

Also, there is no withholding tax on any payment of principal or interest made by a Cayman Islands SPV.

In most off balance sheet financings, security is generally granted over the underlying asset pool (including rights pursuant to any hedging arrangements) in favour of a trustee.

The role of the note/bond trustee and the security are constituted by a trust deed. This contains fixed and floating charges or pledges over the underlying assets for the benefit of the holders of the SPV’s securities. The typical security structure is set out in figure 2 below.

One point to note about the Cayman Islands is that they do not have a system of registration of charges, and it is not therefore possible to obtain statutory priority for a charge or mortgage. Instead companies are required to keep an internal private register of mortgages and charges, although failure to make the appropriate entries does not, of itself, affect the creation of the security interest or its perfection or priority.

The law which governs the creation of the security interest depends upon the application of the conflict of law rules but in general terms, these look to the law governing the security agreement and the law constituting the asset over which the security has been taken or the law of the place where the asset is situated. 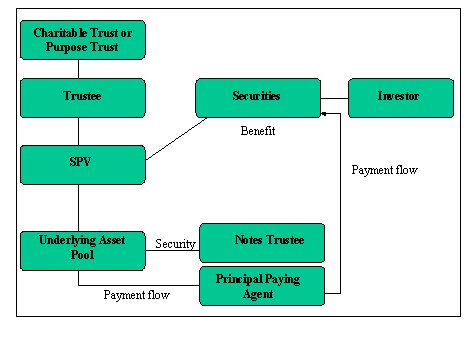 In the securitisation/structured finance context, there are generally no relevant restrictions on the business an SPV can do in the Cayman Islands. This means that, for example, it can lend, borrow or issue debt securities without running into requirements to become licensed as a bank.

There is no specific regulation of debt issues unless they are listed on the Cayman Islands Stock Exchange.

Unlike some other jurisdictions, there are no minimum capital requirements for a Cayman Islands SPV. As a matter of practice, however, in an off-balance sheet structure it would be usual for an SPV to have an issued share capital of $1000, as it is important to ensure that there are some funds available to distribute to the beneficiaries of the charitable trust.

Establishment Of An SPV And On-Going Requirements

One distinct advantage the Cayman Islands have over some other jurisdictions is the speed with which an SPV can be established - an exempted company can be set up in less than 24 hours.

A Cayman Islands SPV which is incorporated as an exempted company (this is generally the form which an SPV would take) only needs to have one shareholder and one director (which may be a corporation or other legal person) neither of which require to be resident in the Cayman Islands.

The SPV must keep a register of shareholders at its registered office or at some other place notified to the Registrar of Companies but this is not available for inspection by the public.

On an on-going basis, the annual reporting requirements are also minimal and simply consist of a statement signed by the company secretary or a director that the company has conducted its operations mainly outside the Cayman Islands.

Other meetings including shareholders' meetings can also be held anywhere in the world and do not have to take place in the Cayman Islands.

The principal rating agencies have rated numerous structures involving Cayman Islands SPVs and are generally comfortable that their usual concerns (for example bankruptcy remoteness, restriction on activities, no amendment of memorandum and articles, limited recourse arrangements and granting of security) can be addressed. Cayman Islands insolvency law is generally seen as being creditor friendly and therefore acceptable to the rating agencies. A further factor is that the rating of a transaction will usually fall to the weakest link in that transaction, and in no event can it exceed the "sovereign ceiling" of the various jurisdictions where the parties are incorporated. Accordingly, the status of the Cayman Islands as a United Kingdom Overseas Territory means that the sovereign ceiling for the Cayman Islands is high. This is a distinct benefit to transactions using an SPV based in the Cayman Islands.

Insolvency In The Cayman Islands: A Creditor Friendly Jurisdiction

As mentioned above, Cayman Islands insolvency law is generally recognised as being creditor-friendly for a number of reasons.

The Cayman Islands do not have any system of corporate rehabilitation such as the English "administration" procedure or US Federal Chapter 11 proceedings where a debtor can effectively "freeze" the rights of creditors including the creditors' rights to enforce security interests.

Cayman Islands law does not prevent secured creditors enforcing their security in the liquidation of an SPV – there is no concept of an insolvency stay and liquidators of a Cayman Islands SPV cannot disclaim onerous contracts and the contractual rights of creditors continue to exist following a liquidation.

Cayman Islands fraudulent preference rules only apply when a disposition is made with a view to preferring one creditor over another – it is not enough that an asset or payment was made in circumstances which resulted in one creditor losing out. There is also no general concept of substance over legal form in the Cayman Islands.

Netting and set off arrangements are also recognised by express Cayman Islands statutory provisions and will be enforced both pre and post insolvency assuming they are effective as a contractual matter under the governing law of the contract in which they are contained.

Finally, and as mentioned above, contractual subordination is recognised by express statutory provision (assuming, of course, again that it is effective as a contractual matter under the governing law of the contract).

Listing On The CSX

While a Cayman Islands SPV can list the securities it issues on any appropriate stock exchange (subject, of course, to the securities meeting the criteria for listing of that exchange), the Cayman Islands Stock Exchange ("CSX") offers an alternative venue for listing, which may be advantageous in certain circumstances. For example, the disclosure requirements of the CSX in relation to asset backed debt are significantly reduced where information on the underlying assets is available from other sources – for example if they are listed on a recognised exchange. Also, debt issuance programmes need only be approved by the CSX every five years, rather than annually, as for most stock exchanges. A further advantage is timing - the CSX is happy to guarantee document turnaround times, with the result that a listing can be obtained in as little as 10 to 14 days.

In summary, the Cayman Islands are set to continue their dominant role in the structured finance industry. This is for all the reasons referred to above but particularly through a combination of the legal and regulatory environment continuing to be conducive to structured finance transactions and the expertise and professional support that is available to support the transactions from inception to their conclusion.