In the 2018 Ontario Budget, the government proposes to increase access to public services in health care, childcare and pharmacare, in part by eliminating costs for low-income earners and social assistance recipients. It appears that the government will try to pass most of its budget measures before the election campaign officially begins on May 9, with the provincial election scheduled for June 7, 2018.

The 2018 Ontario Budget proposes to eliminate Ontario's Personal Income Tax ("PIT"), a surtax that functions as a tax on tax. The PIT brackets and rates will be adjusted due to the elimination of the surtax.

The eliminated surtax increases the tax burden of most high-earners but does not raise taxes on the highest-earning taxpayers. Overall, 83 percent of Ontario's 11 million tax filers (9.2 million individuals) should not experience any increase in their PIT. If the proposed changes pass, it will be effective July 1, 2018.

The chart below outlines the impact of the proposed changes to PIT rates and brackets in Ontario. 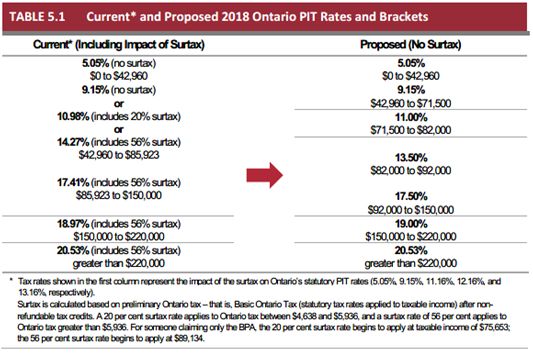 The small business Corporate Income Tax ("CIT") rate is reduced to 3.5 percent effective January 1, 2018. The general CIT is maintained at the rate of 11.5 percent.

The Ontario government will provide relief for taxpayers making an eligible charitable donation that would otherwise decrease as a result of the eliminated surtax.

To reduce the impact, the Ontario Charitable Donation Tax Credit ("OCDTC") will increase to 17.5 percent to match the top rate for previous surtax payers. The first $200 of donations will continue to be eligible for an unchanged OCDTC rate of 5.05 percent.

Ontario will receive 75 percent of the federal excise duty collected on cannabis for sale in the province. As a matter of policy, the Ontario government takes the position that the appropriate taxation on cannabis sale is an essential part of eliminating the black market. Nonetheless, the province does not expect to turn a profit in its first years of cannabis legalization due to the startup costs and the establishment of a retail network.

The Ontario Cannabis Retail Corporation, a Crown corporation and Liquor Control Board of Ontario subsidiary, will manage the sales and distribution of cannabis within the province. The province will work with municipalities to prepare for the legalization of cannabis through the Ontario Cannabis Legalization Implementation Fund. Municipalities will receive $40 million over the first two years to implement the legal use of recreational cannabis. If the federal excise duty from recreational cannabis exceeds $100 million in the first two years of legalization, Ontario will provide municipalities with 50  percent of the surplus.

Cannabis will be subject to the full 13 percent HST, subject to an 8 percent rebate for status Indians.

As part of the government's plans to invest in social services, some pre-budget announcements were made through the GSN and EPO funding memoranda explained in more detail below.

To streamline the EPO, the ministry will transfer programs to the GSN starting in the 2018-19 school year including Autism Supports and Training and Early Years Leads.

Specific school board funding amounts will be based on each board's salary and performance-related pay envelope, and approved maximum rate of increase, minus adjustments to reflect the increases already provided as part of the GSN salary benchmarks for the 2017-18 and 2018-19 school year for other senior administration.

In 2017, the Ontario Student Assistance Program ("OSAP") sought to ease access to post-secondary education. Beginning in fall 2018, students applying for OSAP may be eligible for more grants and loans through a reduction in the amount parents are expected to contribute towards their child's education, as well as a reduction in the expected spousal contributions. Free college and university tuition through the OSAP program will continue in 2018.

The province will award $3 billion in capital grants to post-secondary institutions over the next 10 years, and funding under the College Equipment and Renewal Fund will double to $20 million per year.

The 2018 Ontario Budget increases health care investments by $5 billion over three years. The investments include:

As part of an expansion in social services, the 2018 Ontario Budget will increase investments in pharmacare by including:

Additionally, effective August 1, 2019, seniors will benefit from free prescription medications, regardless of income. By eliminating the Ontario Drug Benefit annual deductible and co-pay, this saves the average Ontario senior $240 per year.

Most of the infrastructure spending has already been committed in previous budgets. In the next 10 years, $182 billion is allocated for infrastructure projects, including:

On March 14, 2018, Canada and Ontario announced the signing of a bilateral agreement that will provide $11.8 billion over the next decade in federal funding dedicated to infrastructure projects through the Investing in Canada Plan.

Ontario will encourage a low-carbon economy and measures to combat climate change.

On January 1, 2018, Ontario linked its cap-and-trade carbon market to achieve the most cost-effective way to reduce greenhouse gas ("GHG") emissions. Ontario's linking of its cap-and-trade market with those existing in Québec and California forms the world's second-largest carbon market. The provinces anticipate a net GHG reduction of 18.42 million tonnes by 2020 under the cap-and-trade system, compared to a decrease of 12.7 million tonnes under a carbon tax system.

The province will offer Ontario businesses the opportunity to reduce their compliance costs through emissions-reducing technologies and offsetting credits. Additionally, auctions of GHG emission allowances are expected to generate 2.4 billion in proceeds. The province will commit proceeds towards initiatives that may reduce GHG emissions, which include the following priority investments:

The proceeds from Ontario's carbon market were used to launch the Green Ontario Fund, which offered rebates off energy-efficient home improvements, funded carbon reduction projects and encouraged the development of innovative ultra-low carbon technologies and processes.

There is concern that once Ontario joins the Québec-California carbon market, the proceeds from auctions may be lower since it may be cheaper for Ontario businesses to purchase carbon allowances in those jurisdictions. As a result, GHG emissions may not be reduced in Ontario. However, the Liberal government has argued that carbon pollution is a global issue and it is difficult to isolate GHG emission to one jurisdiction. The price of carbon at the 2017 auctions was approximately $18 per tonne, and by 2022, the Ontario government expects the price to be $20 per tonne, providing further incentive for businesses to cut GHG emissions.

The 2018 Ontario Budget reaffirms the emphasis on innovative technologies and Ontario's intention to become a leader in AI.

The province invested $30 million in the Vector Institute for Artificial Intelligence for postsecondary institutions to increase graduates in AI-related fields to 1,000 annually within five years.

The government also committed $15 million to fund Artificial Intelligence entrepreneurs over three years through NextAI, an accelerator for AI-enabled startups.

Recognizing the role of AI in health care, the government is investing $10 million for a Centre of Excellence in Health Care Artificial Intelligence (AI) starting in 2018–19. The government is partnering with St. Joseph's Health System Hamilton, Niagara Health System, McMaster Faculty of Health Sciences and the Vector Institute on this initiative.

The government will also continue to work on the Regulatory Super Sandbox, which would be operational at the same time as FSRA, discussed below.

The government will work on the creation and implementation of the Financial Services Regulatory Authority of Ontario ("FSRA"), a financial services and pension regulator to be operational by April 2019.

The government will introduce amendments to the Insurance Act and the Corporations Act, which will give the FSRA prudential oversight of certain insurance companies incorporated in Ontario. The amendment requires insurers licensed in Ontario to be incorporated in a jurisdiction that meets international solvency standards and will provide FSRA with the authority to make rules.

The government has consulted with stakeholders regarding a framework to regulate financial planners in Ontario. The framework will establish restrictions on the use of titles related to financial planning.

The government will also propose tools for the OSC to enhance and expand its existing enforcement activities, and to strengthen the framework for securing compensation for investors who suffer financial losses due to the acts or omissions of registered firms.

Finally, the government will establish a regulatory regime for financial benchmark administrators, contributors and users to align with international requirements.

Indigenous communities and municipalities will see an increase of $300 million to the Ontario Community Infrastructure Fund (OCIF) by 2018-19 and $40 million over five years for a new Community Transportation Grant Program to improve public transit in underserviced areas. Additionally, municipalities will receive $40 million in the first two years of legalization of cannabis to help address implementation costs.

Dentons is the world's first polycentric global law firm. A top 20 firm on the Acritas 2015 Global Elite Brand Index, the Firm is committed to challenging the status quo in delivering consistent and uncompromising quality and value in new and inventive ways. Driven to provide clients a competitive edge, and connected to the communities where its clients want to do business, Dentons knows that understanding local cultures is crucial to successfully completing a deal, resolving a dispute or solving a business challenge. Now the world's largest law firm, Dentons' global team builds agile, tailored solutions to meet the local, national and global needs of private and public clients of any size in more than 125 locations serving 50-plus countries. www.dentons.com

The content of this article is intended to provide a general guide to the subject matter. Specialist advice should be sought about your specific circumstances. Specific Questions relating to this article should be addressed directly to the author.