The Australian Government has released for consultation the first tranche of the Bill and explanatory materials for the CCIV. In 2017 and early 2018 Australian Treasury issued consultation papers for a CCIV.

The forebear for a investment fund cell company is the protected capital cell insurance captive (PCC), which has had a relatively long life in the offshore insurance market. A review of the PCC provides useful insight into the CCIV framework and the obligations and liabilities in the structure.

PCCs are a form of insurance captive developed in the sophisticated offshore insurance market some decades ago. In many respects, they can be seen as a proto-CCIV, and it is likely that regulators have seen the experience of PCCs and adopted certain aspects of them.

The captive then invests those funds from the sale of its equity in low-risk, marketable securities that function as risk reserves. The risk exposure for a captive is the key driver for the PCC structure, as the legal segregation of assets and liabilities at a cell level supports the risk exposure and business at the captive level.

The sponsoring company pays premiums to the captive company (which is the insurer), who in return insures against risks that the sponsor wishes to retain and self-insure.
The captive can be managed by the sponsoring corporation, independent managers or a specific captive-management firm.

Industry identified (in the late 1990s) that a corporation may wish to gain the benefits of having a captive, but may not have the resources or willingness to actually create one.

The participants themselves do not make any equity investment and therefore do not own any part of the rent-a-captive's equity.

The below framework is useful in understandiung the framework for PCCs and segregation. 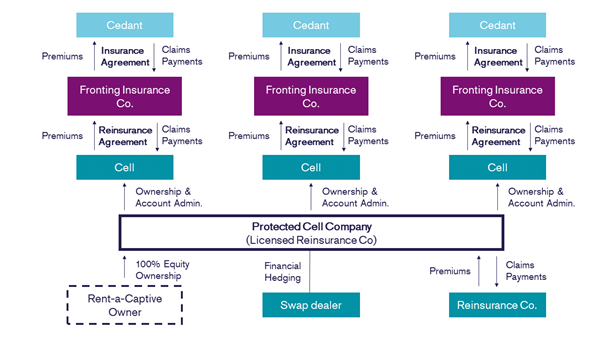 The benefits of having more than one firm in each PCC structure is clear - it reduces overheads by sharing the costs amongst all the participants.

A key driver of PCCs was insolvency. Although there was no intended risk transfer between the insurers sharing the captive, if a cedant submitted a claim that exceeded the resources in their notional account maintained by the captive as the insurer, there was a risk that the captive's entire asset base was available to satisfy the contractual claim.

PCCs are largely the same as a rent-a-captive, the only difference being that all customer accounts are legally segregated in such a way that the segregation will be maintained even in insolvency. They mirror in many ways the CCIV structure.

Business and risk focus in CCIVs

In providing for legal segregation of assets and liabilities, there can be a targeted business focus for a cell and the corresponding captive. For the insurance industry, similar to the funds management industry, this allows for better economies of scale across the capital and resources of the insurance business.

The Australian Treasury has prepared the following summary comparison table for the proposed CCIV regulatory structure for the cell/sub-fund. Source: A copy of the original table is available on the Australian Treasury website under the CCIV Slides link here.